Yesterday, my 8-month-old bit me. This is the toothmark: 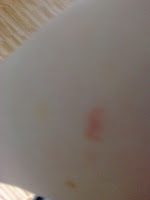 He looked up at me with his toothy smile, proud as punch - "I have teeth! Just in case you hadn't noticed!" I shrieked in surprise, then turned him away from me so I could laugh into my sleeve. Just another example of what a bad parent I am: I'm sure there's some Theory out there that would enlighten me as to how I could use this as a Teaching Moment. The friend who was with me at the time reappeared from behind the door where she'd hidden herself to laugh and said: "Bite him back!"
The next time I will.

See, I feel a little remiss about my son's non-appearance on this blog, because everyone else who blogs with children spends a lot more time talking about them than I do. They frequently share their birth stories and outline the various Theories they ascribe to. So I think it's time for me to do the same.

My birth story
"Do you have a birth plan?" asked the midwife.
"Yes," I said. " 'Get him out!'"
"Okay," she said.
Eighteen hours later, I got him out. It was a bit weird: more people saw my nethers in that one day than had in my entire life hithertofore. The pain was unpleasant but it was finite, so I dealt with it.
That was it, really. No biggie, thank goodness. Hope the next one - if there's ever a next one - will be as straightforward.

Sleeping
So we took the baby home and put him in the nursing bed. The first night he mewled in the darkness and waved his little fists about and he looked so lost that I pulled him into bed with us. I figured that people had been doing it for millenia, so it couldn't be too bad. I made him his own space, with his own little blanket, and he slept there till he was happy to sleep in his cot by himself, five months later.

Eating
Having been given a bombastic set of chesticles, I decided to make them pay their way. I breastfed the baby whenever he felt hungry because I thought the poor little bugger was too young to fake hunger. At five months, he started grabbing our food and regularly enjoyed a stolen croissant for breakfast, so we gave him some solids. Which he pegged into himself at lightning speed. One day, at six months, he unlatched himself from my bosom, fake-gagged, and refused to ever breastfeed again. I closed the doors of the dairy, happily consigned my ugly maternity bras to the back of the closet and returned to underwear that held all my bits in place.

Entertaining
From the beginning onwards, he wanted to be in the middle of everything, and this desire was somewhat handicapped by my not having more than two hands. So I bought an excellent baby carrier from a German company called Storchenwiege and plopped him in there. I could go around doing stuff and he could be on board interfering in the stuff I was doing.

All good so far, right? Not a single parenting book or forum did I read. I just did what had to be done when it had to be done and if it didn't work, we tried something else. However, I've been reliably informed that I wasn't just being sensible or pragmatic, I was actually practising Co-Sleeping, Breastfeeding On Demand, Baby-Led Weaning, Baby Carrying and maybe even Attachment Parenting! Yay, me!

And, even more exciting: were I looking for confirmation about the above, reams of paper have been sacrificed in the writing of tomes on each of them. Entire forums (fora?) are dedicated to mothers talking to each other about all the Capitalised Things they are doing to benefit their offspring. From remarks made by other mothers on the subject of the above, I am led to believe that you are entitled to be a little bit smug about how well you are parenting if there's an academic paper online somewhere to back up your decisions.
Best of all, one should read it and quote it to other mothers ("You stopped breastfeeding when the baby was six months old? Umm, well, I breastfed till Ivor was nearly 25 months. After all, the World Health Organisation's paper on breastfeeding recommends you do it till the baby is at least two. Would you like me to send you the link to the paper?")

But here's the thing, readers - and brace yourselves for some salty language:
I am frikken knackered.
Like, exhausted.
I have very little time for myself and the time I do have, I don't want to spend it online with a bunch of wimmin going on about how well they're parenting their children, when they probably actually should be offline doing it in real life instead. I don't have time to read books about how to develop my child's creative urges or how women in Borneo have been carrying their babies in shawls for 60,000 years and no Bornean child ends up in teenage therapy. I'm happy if some of the food that enters his facial airspace actually goes into his mouth. I'm ecstatic about a poop. As long as he's laughing, and I'm laughing, and we both get a few hours' sleep every night - well, I'm delighted.

My Parenting Goal is to raise a decent human being. And not mess him up too much. And still be talking to him when he's 30. That's about it. I'm not quite sure how I'm going to achieve that yet - or, if indeed, I will at all - but I hope I can manage it with a bit of common sense and good humour. If I ever have free time in the next eighteen years - which looks unlikely - I'll borrow a few books or go online and be informed about what I'm doing wrong.

In the meantime, I'll muddle on. And if the little stinker bites me again, so help me, I'll bite him back.

Posted by The Gingerbread Lady at 3:54 PM

You hit the nail on the head. I did go to the fora (Mothering to be exactly) when I was pregnant with my first because otherwise I would have never heard of cloth diapers, extended breastfeeding or babywearing. So that is a plus. But I started getting annoyed at the "wimmin" because of the reason you mentioned. Those millitant who think you can only AP if you are doing it exactly like they do. Ugh. I do recommend the baby book by Sears, it's fun and light to read. And it is a more grey manner of practicing AP than those fora "AP gurus" are talking about. Trusting your own gut is very hard in mommyhood because of all the conflicting opinions on raising kids. It's so hard sometimes!

I am not a parent but it sounds like you are doing just great :-) And this post was hilarious!

Oh you are funny. Save your spare time for craft I think :)

You go with your bad self! Sounds like you are doing great...

Alternatively you could use your spare time to pen a book on "common sense parenting" ;)

Sounds like you're doing a good job, my mother used to sit me in front of the washing machine to entertain me too, sometimes she even just put something brightly coloured in on a spin cycle specially for me to watch.

The picture in front of the washing machine is so funny, it made me laugh so much! Is he wearing something you knitted?

So refreshing to read a great, honest, and realistic post on motherhood. It made me laugh all the way through. If you're thinking of going to mums and tots groups (which are a god send at first)- BEWARE! - you'll get asked the same questions about your little limpet a gazillion times, it'll bore you to tears! This post is of more help to new mums than all the books from so called experts put together, and don't even get me started on celebs like Myleene Klass and Gwyneth Paltrow ;-D x

You do make me laugh!
I read every book going whilst pregnant with my 1st, everything went exactly as per said text books up until the moment I started labour - nothing has been anything like the books since then and he's 18 next birthday! The best advice for a new mum is to do whatever gets you through (within reason obviously) and if the rules don't work, change them - you're allowed 'cos you're in charge!

I believe you're doing great! (At least, I did it more or less like you, and 18 years ago I didn't have internet, so no fora to me)
BTW, the bite part makes me laugh - I did bite my daughter back when she was 2, 3yo. It works :D

muahahaha.....
I sometimes hated going to playgroup. Some of the mothers there were already "helping" their kids develope useful skills and me, I was just too overwhelmed with all the work the twins meant, that I was happy that I made it to said playgroup.
Best conversation:
"Oh, you don't go to swimming classes with the little ones?"

"which one I shall let drown?"