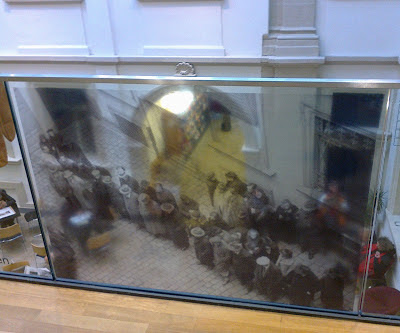 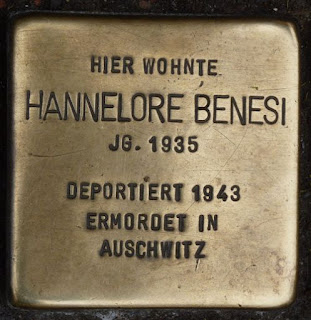 Posted by The Gingerbread Lady at 6:02 PM

Very moving, thank you for posting

I visited Dachau and Nuremburg during the early 80s when my husband was stationed in Bad Toelz. It is sad this happened, let's not forget so it doesn't happen again. Thank you for your remembrance.

I wish I could tell my father about this, but he is deaf to anything that might show the German people in a good light. the last "conversation" he and I had on the subject ended in me walking out in tears, having pointed out in vain that the overwhelming majority of people now living did not even exist when these atrocities took place. I will not tell you what he said, it is too shameful.
If it had all been the other way round, I wonder whether we British would have been brave enough to commemorate the people that some of our forefathers brutalised. We are very lucky that we haven't had to find that out.

@Playing Hooky - in my experience, many younger Germans have a difficult time with the whole issue. They've had the responsibility of the Third Reich drilled into them, to the point that many feel irritated because they've been made to feel personally responsible ... without having done anything ... yet they do feel responsible ... despite not having done anything. It's hard to comment on as a non-German. In the defence of today's Germans, I must admire the way the majority of the German nation accept their past and don't try to dodge it. Like you say, I don't know if the Irish people would be as forthright.

And if there's one good result of their whole horrible history, it's that I have found that Germans are often quicker to stand up for injustice and demonstrate civil courage more readily than I've encountered in many English-speaking countries. Where many of us would just prefer to turn a blind eye and keep the peace, I'm constantly surprised at how normal German citizens will stand up and say, "No! That's not acceptable!" It's a lesson learned at the cost of many, many lives, but I admire the fact that so many German citizens seem to have learned it.

In any case, let's hope that we learn to forgive, but not forget.

My father was lucky enough to leave Vienna with his elderly parents after the Anschluss, and his siblings made it out later. We lost entire branches of the family.

Elder DD has a Ph.D in modern German history, and has spent a good deal of time in both Austria and Germany. Her take was that the Germans accept their responsibility, but that the Austrians don't.

Me, I've struggled just with hearing a German accent, and yet a number of years ago, heard my dad in a tape my sister made, and he spoke with a heavy German accent. It took me by surprise; you grow up with parents with accents and you don't hear them. Then they die, and you hear their voices many years later, and you are stunned. How did my dad, who spoke perfect English, have such an accent?

All this just to say that as a Jew who grew up with Holocaust stories experienced by my family, that my feelings are very complex. I can never forgive, but I can give credit to how Germany conducts itself today. If the Germans say "never again", then I believe it.

Austria, however, is another story, and has learned nothing. The country has never taken any responsibility for its actions. The "line" is that the Nazis forced themselves upon the Austrians. My dad, who was in Vienna, told us that they welcomed the Nazis with open arms.

Sorry I nattered on so much, but this just touched my soul.

@ Ruth
I'm very sorry for your family's loss. My husband's great-grandfather was gassed by the Nazis when his Oma was a little girl, and there's just a big black hole in their family history, it's just not talked about.

I'm sorry to hear your daughter's views about Austria. I haven't been in the country for years and years, I can't add my own experience.

But the longer I live here, the easier it is to understand the circumstances that created the Third Reich, but at the same time, the more you know, the harder it is to UNDERSTAND the scope of it. It was a horrific chapter in history and very few countries came out of the war with a clean slate. The Allies committed some atrocities that are unspeakable - the bombing (napalming) of Dresden, a city that was full of refugees - in 1945 makes my stomach turn. Many of the other European countries allowed horrible things to happen to their Jewish citizens by simply doing nothing (I believe Denmark is one of the few countries that showed some backbone in the face of the Nazis' policies.) That's no excuse for what happened here, but just to remark that the fact that people's lives were generally regarded as so ... worthless just sickens me.

And the sad thing is that although we spent decades saying it should never happen again, it did - in the former Yugoslavia (ethnic cleansing, camps)in the 1990s - and it continues to happen on a much smaller scale in dark corners of the world.

This post, and the comments, have intrigued me. I find the name of the holiday intriguing as well. I wonder how long it took for Germany to arrive at it.

As someone who lives in a country with a short history, yet filled with complex interactions with many groups, I am pleased with your take on the current state of Germany's relationship with its past. I hope we're all working on doing better as we learn and take stock.

Gingerbread Lady,
It is indeed a very complex issue. And human beings don't learn from their mistakes, either. Take a look at all the genocide since WWII.

At least the German people treat this seriously and take responsibility. It's not my place to forgive or forget (I'm that close to it), but I feel that there is decency in Germany today, that the people have acknowledged the great wrong done to so many people and hopefully will do all to prevent it from ever happening again.

Thanks for your post; it has truly resonated with me.

I am German and I know exactly what you describe about our feelings. I am 27 years old. However, I had bad experiences in other countries where people called me a Nazi just because I speak German.
It is so awful what happened and it shall be remembered so it won´t happen again. Nevertheless, I dont want to take all the blame as I haven´t done anything.
I am really sorry for all this suffering and I think it is a good thing that we commemorate it.
Have you been to the Dokumentationszentrum in Nuremberg? I think it is a very interesting and worthwhile museum. I can only recommend it.

I am sorry if I made any mistakes as I am not a native speaker.

The Holocaust has always fascinated me...I have read much on it...

My great-grandfather always told people he came from Austria, but the only record I have shows he was born in Bavaria. I know many times country lines changed.

I lived in Germany as a child because my father was stationed there and have always wanted to go back..

In 1986 we hosted an exchange student from Yugoslavia..and in 1987 I spent 2 months in the country outside of Zagreb..when the war began there and the atrocities, she asked why noone was helping them...it was heartbreaking..

And the USA definitely has the fate of the St Louis on their hands...

Thank you, as it is interesting to get a modern perspective on this and the "temperature" of the country on this.

This is all very moving... having visited Auschwitz twice and feeling heartbroken each time. I see a 7 year old little girl, and I think that no child, no human being for that matter, but no child deserves such cruelty, either now or then.
In Alsace people suffered too during the annexion by the Germans. I don't know anything about it and didn't even grow up there, but up to when I was 20 it was not advised to tell me, as many French "from the inland" said, that I was German. Now I am truly thankful that this place has been peaceful for so long and I no longer deny our Germanic heritage (though it tends to disappear, along with the dialect). It has been very touching to read all the comments to this post, too.