Naughty Me, Pudgy Me

Yes, I've been a bad Gingerbread Lady and haven't posted in ages and ages. In case you've been worried about me, I have to reassure you that this was mostly due to the fact that nothing much was happening in my life. As I said, pregnancy is sucking out my creativity - it's being turned into valuable vitamins and minerals for my little Murkel. But I am doing a number of baby blankets - 2012 is awash with fecundity. This is one I just finished: 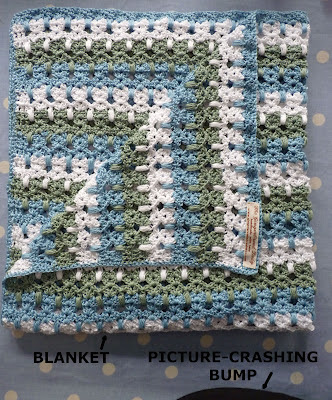 As you can see, I am expanding daily. Daily. As in, every day. My midriff now has a mind of its own and, as you can see above, has started to gatecrash photographs. If you've never been pregnant before, you might find it alarming to imagine that one morning you wake up and look down - and you've grown a potbelly overnight. Or so it seems. Even more unsettling is the fact that everyone congratulates you on your roundiness: what a great bump I have! How rotund I've become! It's like wearing a very silly hat: everyone feels compelled to comment on it.

In addition, I'm beginning to feel movement (strange) and see movement (creepy). Mr Gingerbread is currently reading a book about his impending fatherhood and this is giving him Notions, e.g. every time I mention that I can feel something squirming inside, he drops everything to get in on the action by kneading my stomach. Yesterday he had his hand on my stomach when the fruit of his loins decided to karate chop the wall of my uterus. He shrieked and whipped his hand back, as though stung. "I'm sorry," he said, "but that just feels weird." Haha. Bet they didn't tell him that in his stupid book.

See, gone are the days when men were present at conception (just about) and then, nine months later, were hauled out of the pub closest to the hospital, handed a cigar and told the sex of their offspring. No. Nowadays, they are involved from the beginning onwards and are encouraged to interfere.
"Your bag is too heavy, let me carry it."
"No, it's not too heavy. I took most of the stuff out of it so I could carry it myself."
"Give it to me, I'll carry it."
"I said I was fine, thank you."
"You're pregnant, let me carry it."
(tug of war with bag ensues)
"I'm pregnant. It's a condition, not a disability. Let me carry my own bag, please."

Worse still is the Battle of the Bicycle. Mr Gingerbread is not keen on my riding a bike. We have a battle of wits every time I try to mount my trusty velocipede. He's not so much afraid of my cycling abilities, but rather the possibility of me falling off, or being hit by some other vehicle. Clearly, there is more of me to hit than there was before, but that doesn't mean that the entire population of Gingerbreadtown has plans to whack me off my bicycle on the way to work (and if they did, they'd have to drive up into the bicycle path to do so.) On the rare occasions that I cycle, he stands in the doorway and watches me reproachfully, his big, blue eyes full of remorse at my wilful endangerment of our unborn child.

P.S.: Mammy, I know you're reading this and I know your fingers are itching to pick up the phone and lecture me the dangers posed by bicycles in pregnancy. I cycle at a snail's pace on bicycle paths, I will not fall off, go into premature labour or be hit by a bus, I promise. The husband has already outlined every possible danger from attacks by rabid squirrels to crashes involving out-of-control trucks.
No need to worry, honest.
Posted by The Gingerbread Lady at 8:45 PM

I'm glad you're well and that blanket is beautiful, the colours are lovely and work so well together.

Thank you, Paula! I made this for someone else - she said, "I want a blanket in sage green and pale blue" ... and I thought this would be the perfect pattern for that. The colours are very nice together, she really picked a lovely combination.

Good on you for cycling, I seemed to lose all sense of balance when I had a bump.....centre of gravity and all that, mind I'm pretty rubbish on bike most of the time anyway! And have been known to fall off for no good reason. However, I did do everything else, about two days before I had my first, I was standing up a ladder on one leg stretching to paint our outside windows....

Pretend I am your Mother. Enough said! lol Love the blanket!

too funny - glad to hear all is going well. Love the pattern on the blanket

Ha ha ha your post had me chuckling over my toast, I remember so well those first strange movements and later being able to make out the outline of a foot! Crazy. As for the cycling I kept riding my bike right up to the end, easier than lugging that huge stomach around by foot. It was fine, it made me feel normal and busy and mainly fast when I was out and about. You go girl cycle on. ♥

If men think it feels weird from the outside, they should feel it from the woman's point of view. It feels amazing at first and then it's like "oh for goodness sakes, stop doing jumping jacks in there". I envied the pregnant women who just got lovely round bellies. My entire body got into the act and I swear you could tell I was pregnant by just looking at my arms.

Glad to hear you're doing well! The blanket is lovely---is there a pattern? I really love the way the stitches make the colors pop!

Just the idea that people would comment as though I was wearing a silly hat makes me fear pregnancy. I'm very impressed by your bravery!

That blanket is just perfect :D

Tell Mr and Mammy not to worry, it could be worse, you could be riding horses while pregnant, like I did. The only one of my four who sometimes behaves like he might have been dropped on his head in utero is the youngest, and I'd given up on the horse riding by then.

This is marvellous! I had my third and last child just over two years ago and reading your thoughts on pregnancy has brought it all flooding back. Sorry, I don't wish to sound as if I am gloating over the fact my pregnancies are done and dusted and you are halfway through yours. It is SO refreshing to read a pregnancy account which is not awash with 'oh-isn't-this-wonderful' beaming smiles.

The strange movements? Yes to that; I felt as if I was carrying an alien for quite a few weeks. The thing that really rang true is how your growing baby has drained away most of your creativity. I was ABSOLUTELY useless creatively during each of my pregnancies. And yet when the baby arrived: woosh it all came flooding back and more.

Good luck and, as many enjoyed reminding me, ENJOY your pregnancy ;-)

Listen, let him help you as much as he wants now; you'll have it to remember when he's nowhere in sight for the midnight feeds ;-)

Love the blanket :) and the pregnancy reminders;D what I loved MOST about my pregnancies were the midnight loo trips. then when you just got going back asleep, whoosh an almighty kick! I lost my creative mojo completely on my first pregnancy, but made up for it second time round. Wish I did neutral baby cardigans rather than being left with a bag of blue cardigans tho!!! Love and hugs to your pot belly :)

I just love you website. I really enjoy your comments it trnasport to. Wonerful wolrd. Also your husbnd is a good man , i imagine you are too. I apreciate lt the beutiful crochet you post. I just love, love to read your stores i thank you very much for everything. Good luck with your new baby, my be. Healthy. Child an may god bless you n your family always. If you ever need help with a pttern feel free to ask thank you
Evelyn morales

4.bp.blogspot.com/-oLQrV68OUWQ/T6q6lye_HGI/AAAAAAAABlg/g02mQFcKMYA/s400/BLANKET+BUMP.jpgt to a wonerful world. I also enjoy your cochet