Grrr. I'm having a bad crochet week. I have lots of ideas for new projects but everything I touch turns to ... rubbish. One project took me ages to make but has turned out useless: it's 25% too big, due to a mathematical booboo on my part. Yes - maths = my nemesis.

In any case, the husband and I returned to Germany on Tuesday, flying east over the continent and away from a brewing storm so big that it later that day dislodged a bus shelter and whacked it against a plane at Edinburgh airport. As you know from previous posts, disaster follows when we travel (volcanic eruptions, blizzards, tsunamis and nuclear reactor meltdowns), so a flying bus shelter was relatively mild, given the previous catastrophes unleashed by our wanderlust.

Our stay in Ireland was - to use a bit of Hibernian English - great craic. Craic is a very useful Irish word, it means 'fun' or 'a laugh' (as in, to have a laugh) and its intrinsic link to fun and general frolics is only underlined by the fact that it's pronounced 'crack' - which means you can frighten the wits out of non-Irish people by saying things like, "I had great craic last night!" or "I don't think it's possible to have too much craic!" or the ecstatic declaration that something was "the best craic I've ever had!"

It's a wonderful word and has many different meanings. For example:
What's the craic? = Is there anything newsworthy you wish to share, my good fellow?
The craic was mighty! = Jolly good fun was had by all!
We were only having a bit of craic! = No ill-will was meant, we were simply having a spot of fun.
There are regional variations to craic - in some places it has been awarded a definite article: the craic (as in "Are you having the craic?" = "Are you enjoying yourself?") and in other places it has even earned supplementary (and baffling) adjectives, like horrid craic. My brother James assures me that having horrid craic is all the rage in Sligo, in the west of Ireland. Having spent two days in Sligo, I am willing to believe that just about anything is possible there. 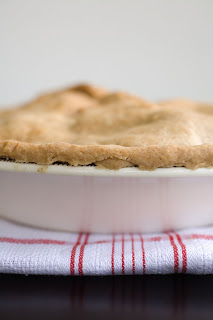 Anyway, Mr Gingerbread and I had many interesting discussions of the following variety:
Me: I'm going to visit my Auntie Dell (= or substitute name of random relative here)
Him: Is that the one with the two sons?
(I'll just interject at this point to tell you that my mother is one of - brace yourself - fifteen children. They in turn are a rather fertile bunch. Having two sons really does not narrow it down and he should know this. He was at our wedding, after all. He has seen - nay, he has participated in - a number of family photos.)
Me: She has lots of sons. You know my Auntie Dell, you've met her a dozen times -
He holds up his hand to stop me.
Him: Wait. Does she live in town?
(Again, this does not help. My mother's family has multiplied rapidly but in a geographically-restricted area. Most of them still live in or around the town they grew up in.)
Me: No, she's -
Him (triumphantly): Wait! She bakes the apple pies!

I pause. He's right - kind of. All of my aunts bake apple pies, or apple tarts, as we call them. But my Aunt Dell makes my favourite apple tarts. Each aunt has a tiny variation on a standard shortcrust recipe, some add cinnamon or nutmeg to the filling and some don't, but every pie is different and unique to the piemaking auntie in question. And sometimes - genetics are a funny thing, my friends - the children of the piemaker commit the heresy of preferring the pies of an aunt to the pies of their mother. I am one such evil child. I love my mother's apple pie, I swear I do. But I also love my Auntie Dell's apple pies just as much ... and on some days a tiny bit more. This is something my mother and my aunt are both aware of and when I visit my Auntie Dell, it is not uncommon for her to produce a freshly-baked apple - or rhubarb, I won't say no - pie, which she'll place on the table with a flourish that might be a shade more triumphant than strictly necessary in the presence of my indignant mother.
"Hrrrrmph!" my mother snorts, as she helps herself to a slice of appley nomminess. I know she's thinking: Ungrateful wretch.  But it doesn't stop her eating the pie, though. She'll even have a second slice to confirm to her own self that her apple tarts are better.

However, this Christmas we dropped by unannounced for a quick visit and there were no apple tarts - not even a paltry rhubarb tart, for that matter. I don't want to make a big deal about it but, quite frankly, I was utterly devastated - it has taken me a full week to recover from the disappointment and blog about it. A poor start to 2012 indeed.
Posted by The Gingerbread Lady at 4:26 PM

I know of the apple pie wars. My mum is always the judge in the bake off between me and my gran (her mum) though she claims she can never decide whose is better (it's clearly mine!)

And it sounds like you're having a good time on Ireland

Mmmm, the pies sounds delicious, I would like to offer to be a pie tasting judge if you ever need one :D

There is NO end to the enjoyment I derive from reading your blog! You have a wonderful gift of wit and words! Hugs, Annette

I knew something unnatural had to be to blame for this evil weather we've been having! It was you!

Your post made me laugh especially Mr Gingerbread's last line, that was so funny.

Thank you for the smiles - hope your crochet improves and you have a Happy New Year!

So being apple pie-less was horrid craic then? Just trying to be clear about this.

I have four children and if comment is made as to the number I always say it seemed like a good idea at the time. Clearly your grand parents were full of good ideas ;D

You disappeared from my blog reader, I thought you'd gone :( So glad to have found you again, and thank you for the cheering and kind comment re. my bumpy ride :D

I really really want an apple pie now. To the point that I am considering bundling the small one into the car and driving to buy apples,
I have been having the same crochet issues, I start something, then don't feel the love

I had wonderful craic today!! I made apple crisp! Does that count? lol It was almost as delicious as apple pie. I love your story about your aunties, as I never had apple pie made by aunties as they all lived very very far away, and now they are all gone. boohoo.... but if you are ever in Calgary, I could make you some apple crisp! It's best with some Foothills premium ice cream on top!! :)

I feel your pain!!!!! As such, I have spent 9 years perfecting "The Apple Tart" Now I need to spend the next 9+ years perfecting the art of removing the years of testing from my waistline...I think Dells secret is in her perfectionist rolling of the pastry... an art in itself X

Your post made my day. I had a good laugh. I think I will still laugh inside when I'll tackle those unloved chores that have to be done today. Hihihi

I'm not sure, but I think this makes you my craic dealer.

We use "craic" in northern Scotland too "fits e crack lek?" would be our way of asking "What's up?". Of course there was always a rude answer to that question floating around... We also use craic in the different contexts like you mentioned. There really is no word in English to compare it to nor as useful, I think.