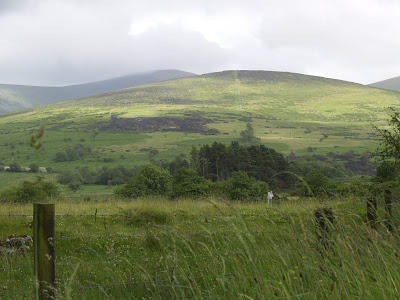 The Gingerbread Lady finds herself at home in windy Ireland in the bosom of her enormous family. All of the Gingerbreads send you their best regards, but I've already received dire threats to my well-being if any of them feature personally and named on this blog. Frankly, though, none of them have done anything interesting enough yet to feature in a blog entry ... with the exception of one brother who has a new girlfriend and is refusing to produce her for us to check her out. Apparently, the gimlet glare of eight mischievous Gingerbread siblings is the trial by fire that no young relationship wants to endure. Which is a pity, really, because we've already compiled a list of Interesting Things In Our Locality to show the new girlfriend :


1. The Swing
We have a pear tree with a frayed rope swing on it. It's very exciting. You can see it from the kitchen window, but nonetheless it's worth walking down to the bottom of the garden to see it in all its glory.


2. The Cattle Grid
A cattle grid is a shallow pit covered by bars at the entrance or gate to a home. They're quite common in this part of the world, because local farmers often herd their cattle down the country roads when moving them from one field to another. Theoretically, they're supposed to deter frisky bullocks from paying you a social visit, though we've had occasions when a bull or bullock, hopped up on the excitement of a jaunt down the road, take a flying leap over the cattle grid and come thundering down the avenue of my parents' house (this is v. scary). In any case, a slow, ambling walk to the top of my parents' lane often culminates in an examination of the cattle grid, mostly because local wildlife falls down it quite a lot. Thus a simple stroll might even up in an emergency rescue operation to retrieve e.g. a recalcitrant hedgehog. This used to involve gardening gloves and a lot of bad language (hedgehogs like to roll up into balls, did you know that? And they're rather spiky, the little devils. And in their roundy state they're very hard to wriggle through the bars of a cattle grid.) Nowadays we would just build them a little ramp and sprinkle it with food and hope to goodness their little hedgehog brains figure out the rest.

3. The Place Where the Water-Pump Used to Be
Our local attractions were slashed considerably when the villagers of Ballyroe took our water-pump (our = it was at the crossroads down the road from my parents' house). It was a quaint, functioning water-pump from a time before indoor plumbing was common, when local families had to drag buckets of water from this pump at the crossroads. I'm sure it was the centre of all kinds of gossip and malarky, but in recent decades it had become a curiosity rather than a necessity. One day the local council removed the pump and - coincidence? I think not - a remarkably similar pump turned up at the recently-renovated village centre at the heart of Ballyroe, five miles down the road. Aside from bitterly muttering, "That's our pump!" or "They stole our pump!" when cruising through Ballyroe, little else was done to recover our stolen property or, indeed, to even establish whether that pump really was ours. So nowadays we walk down to the place where the pump used to be and stare mournfully at the stump it stood on. We take visitors with us to indoctrinate them into this culture of begrudgery, so when they pass through Ballyroe's smart new village centre, they know they have to grumble at the thieving wretches who stole our pump.

And because Irish country people have elephant-like memories, people from our crossroads will still be whining about the stolen pump several generations from now.

4. The Big Tree
It is, as the name would suggest, a big tree. We like to walk visitors down the road to look at this tree. It often ends in confusion, as the Big Tree's attraction isn't instantly identifiable: it's a tree, people. And it's big. Look on it and be awed.

No doubt you need a stiff dram of whiskey after all of that excitement. You probably have to smooth your hair down after this rollercoaster ride of a post. Perhaps you're even thinking of booking a flight over here as soon as possible to view the swing and the stump of the pump with your own little peepers. So why oh why doesn't the Gingerbread brother want to show his girlfriend all the delights of our locality? She just doesn't know what she's missing.
Posted by The Gingerbread Lady at 3:17 PM

How beautiful it is. I hope Germany holds its own against it.

Don't forget to be annoyed with your brother for denying you the pleasure of being shown Interesting Things in Her Locality as well. Ah, the selfishness of men!

One of these days I'm going to cross the big pond and visit Ireland. It's been a life-long dream and since I will be 61 soon, I'd best get my hiking shoes on, don't you think?

Thanks for the stroll and I too can't understand what on earth is the problem with brother introducing his new girlfriend. ;-)

This makes me think of my husband who pointed out to our poor bored grandchildren the longhorn cattle down the road from us — EVERY single time we passed them. Without fail he did it. I do hope you Gingerbreads don't take the same people to the same swing, the same cattle guard AND the same erstwhile pump every time they come?

The girl does not know what she is in for....! I think the missing pump would do it for me....

My hubby is from Whitley Bay, nice if you like a gale, and EVERY time we drive through town we must pass a small church at an intersection and without fail he says...

"Did you know...that's where Aunty Margaret and Uncle Andrew got married....?" it has become so bad that as we approach the church, all of us start to yell DON'T SAY IT, PLEASE DON'T SAY IT....So the locals get a view of a car packed full of Asian looking girls (2) and me (Irish/Aussie) screeching while hubby grins, biding his time....

Gosh, makes me nostalgic!! But you left out two more important landmarks: Louis' bus (even though it is seasonal, you can still see where it would be parked) and the hand-road... what an exciting place we come from :)

Lol Love this! Sounds just like my Christmas, apart from the big tree, which we cut down and put lights on:)

Reminds me of the town where several of my brothers and I were married. We lived in a tiny village on the edge of the great Canadian wilderness; the custom was to go to the nearest big town (90 miles distant) for a civil wedding, then have a second, church wedding with all the trimmings, in the little rural assembly where we had our connections (but no pastor licensed to marry). The part of this story that has anything to do with your reminiscences about Irish landmarks is that for our civil weddings, we were actually married in Criminal Court rather than Family Court (I forget why--maybe the courtroom was bigger? maybe FC was being renovated?)--but anyway, every time we drove past the very obviously labelled Criminal Court building with our kids in subsequent years, we always pointed it out to them and told them, "That's where Mommy and Daddy got married."