The Irrational Fear of Onions and Other Inherited Quirks 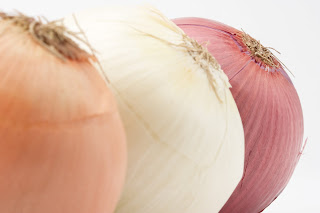 Turning into one or other of your parents sometimes sneaks up on you.
I was lining up ingredients in the kitchen recently, getting ready to bake, whilst my husband was hacking an onion to death on the other side of the room (I love him, but Jamie Oliver this man is not.)
"Don't let those onions get near my baking!" I warned - and clamped a hand over my mouth in horror:
Once again I realised that ...
... I Am Becoming My Mother.

See, my mother has an irrational fear of onions in the kitchen. Whenever one of her minions children is assigned the task of chopping onions, she emphatically warns the chopper at least twice to Keep Them Under Control. You cannot take your eyes off the onions for a single second. In fact, onions deliberately make your eyes water to distract you momentarily so they can sneak into your chocolate cake or smear themselves on your jam sandwich.
"Don't let those onions get into my apple pie!" or "I'd better not get a taste of onion off my scones!", my mother shrieks, making wavy motions with her hands to disperse phantom onion juice that's somehow spraying all over the kitchen and into her sugar bowl.  For years I suspected that she believed onions had a mind of their own: turn your back on the little blighters and they'd make a dash across the countertop - nay, across the kitchen - to inveigle their way into your fine baking.

Despite the alarming realisation that I have inherited my mother's Irrational Fear of Bulbs That Have Minds of Their Own, I am nonetheless glad that I have reached this realisation. It's only when you live with someone else that you realise that the way you do things isn't necessarily the only way to do things, however astonishing (or, quite frankly, unlikely) this may seem. I almost drove my in-laws crackers (and continue to perplex them on a weekly basis) because I did things Wrong (or Wrongly. As you wish.) On our first Easter Sunday breakfast together, I sat down with relish to a hard-boiled egg. I took up my knife and whacked the top off it with gusto - a nice, clean boiled egg execution. My in-laws were - and I do not exaggerate - horrified at this display of barbarism.

"Chopped the top off her egg!" said my father-in-law, shaking his head in dismay.
I looked around - my parents- and sister-in-law were delicately tapping their eggs, picking the shell off, piece by piece. A lot more head-shaking ensued.
"She's so strange," I could see them think. "She's doing it wrong!"
Not that I minded, because I was observing their egg pickery with disdain:
"You're all nuts!" I thought silently. "This is the way we do it in my house. This is the right way!"

Years ago one of my former teachers told me a story about a visit she paid to a friend's house. While she was there, her friend started to prepare dinner. She was making bacon and cabbage - a typical Irish dish. Normally, you boil a loin of bacon in a large pot and serve it with mashed potatoes and cabbage (I won't comment on the gastronomic value of this dish or I'll start a flame war among the Irish readers - there are Love It and Hate It camps). My teacher watched as her friend cut a hank off the meat and set it to boil in a separate little saucepan.

"Why are you doing that?" she asked.
Her friend was astonished. "Because that's the end of the loin," she said. "That's the best bit. You always cook it separately, it has the most wonderful flavour. Don't you do it this way?"
And my teacher had to break it to her gently that not only did she not do it that way, but as far as she knew, no one else prepared their bacon that way.
"That's weird!" said my teacher.
"That's bizarre!" said her friend. "Everyone should do it like this - it's the best part of the meat, honestly!"

A couple of weeks later, when they next spoke on the phone, her friend said,
"By the way - remember you were asking about the bacon? Well, I asked my mother why you cook bacon that way, and she said, 'Well, it's the best part of the loin! You cook it this way to preserve the flavour!' Which was fine - except that a couple of days later, my mum phoned my grandmother and happened to ask her why she prepared bacon in that way. And granny said, 'Because I never had a pot that was big enough to cook a full loin of bacon.' It seems you were right."
She was a bit upset. "But it's the best part of the meat! It tastes better when you cook it in the little saucepan!"

Back in 1951, Mrs Brennan solved the Inadequate Saucepan Dilemma by cutting her loin of bacon to fit the saucepan she had. Sixty years and two generations later, her female descendants continued to do the same because no one stopped to think about whether the way WE do it even makes sense.
I wonder how many of us are doing things like this, without being fully aware of it?
Posted by The Gingerbread Lady at 9:37 PM

Here in NYC I know I've heard that story before in altered form. It was about an immigrant grandmother and her oven, I think.

My mother cast on her knitting stitches by using backward loops. I use the long tail method. Point of pride.

Tradition has its place ... and so does modernity, function and thinking for oneself. :)

I had heard that story before (just a bit differently) and it always makes me smile.

No one better get an onion around my baking either. YUCK!

I would never "chop" the top of a hard-boiled egg but my mother does this with her soft-boiled ones and I can't see what is wrong with doing so. I like to cut my hard-boiled egg in pieces (isn't that cruel?). Thus it fits easily onto a slice of bread ...

Mirror, mirror on the wall,
I am my mother after all.

The first thing that came to mind when I read your post was the tendency for people in my area to display their faith on bumper stickers... Always interesting when poor driving skills accompany particularly blatant declarations of religious views. Accomplishing "share faith" objective? Hmm... Perhaps we need to rethink things...

I can see how things like that get passed on. My 10yr old son has recently learned to make a cup of tea and he stirs it 21 times the same way I do. I've told him it's just one of my loony quirks and not necessary but he says that I make good tea therefore the 21 times stirring has to be done.

The biggest argument my then new husband and I had 30 years ago was on how to make a pot of tea for iced tea. I boiled the water first and then put in the teabags. He put the teabags in before the water boiled and thought my way was fussy.

I was appalled! How could this man I loved be so WRONG? We compromised and he made tea his way and I made it mine. However, after a few times of tea bags that dissolved in the tea when he forgot to turn it off when it boiled, he saw the error of his ways and made it my way. I felt totally vindicated.

When my Grandmother made her shortbread, she always stirred it with the largest spoon from her good silverware. When my mom makes shortbread she does the same - the silver spoon must be used! It has magical properties that need to be imparted into the shortbread! Or - as Grandma told me - it was the only spoon in the house strong enough to stand up to hand mixing a big batch of shortbread dough. She had big wooden spoons, but the dough stuck to those and was annoying to scrub off. I tell my kid we have to use the Magic Silver Spoon because she is still young enough to believe me :)

I'm turning into my Dad, I have his sense of humour and I say odd things that he says, which I only recently realised weren't even real words. He calls his swiss army knife a 'dibbly tool' and I asked to borrow one off someone the other day, it took 5 minutes to explain what I meant :D

I am so glad that I'm not the only person who's (a) becoming a parent (dibbly tool! haha!) and (b) married someone WHO DOES THINGS ALL WRONG. They might be quirks, but it's lovely to know where the magic spoon comes from and how a cup of tea can be made so much better with 21 stirrings of the spoon :-)

It is indeed funny how we all have different eating/cooking habits! I actually also lop the top off of my hard/soft-boiled eggs too! My dad grew up in a British boarding-school in Malaysia, maybe that has something to do with it?

Another thing my family does that I've never seen anyone else do and have always wondered why we do it: we use a special "egg poker" to poke tiny pin-prick holes in both ends of our eggs before boiling them. I don't even know what the purpose of it is. Is this a European thing?

We also butter both pieces of our bread for a sandwich, no matter what kind of sandwich it is. I am one weird girl here in the States, let me tell ya! ;D

Love your Realta afghan and want to support you but cannot figure out how to purchase pattern. I put money on the paypal account(took 6 days), and still cannot purchase your pattern. PLEASE help.

I remember the first time I truly realized there is more than one right way to do things. I was fussing while unpacking into a new apartment because the kitchen did not afford a drawer near the stove that could be used to store spices. After all, my mother and my grandmother always kept their spices in a drawer near the stove! Suddenly I thought, "Well, why do they have to be in a drawer?" I must admit unpacking went a bit faster after that.

I think one is lucky if one turns into only one's mother or only one's father. Me, I am turning into both - and it's not pretty!