Not Meant for Me

Once upon a time, many years ago
(Oh, no. It's going to be one of those posts.
Yes, it is. Sorry about that)
I lived in a student residence with four Spanish girls: Rocio, Mai, Conchi and Monica. Monica had a beautiful designer cardigan, a crocheted cardigan made of colourful granny squares in thin cotton.
"I can make that!" I said and borrowed her cardigan to have a look at it. I bought myself some thin yarn in black, a deep pink and a luscious purple, and started to crochet a stack of squares. It became a bit of a community effort: the other girls in the halls of residence kept tabs on my progress, and there was great excitement when I sewed the squares together and single-crocheted along the edges.

Finally, after a month of crocheting, it was finished.
"Try it on!" someone said. And I went out into the hall next to the common room and tried it on in front of the full-length mirror there.
"Ooooh!" said the little crowd of onlookers. I preened a little; it was very nice.
"Can I try it on?" Conchi begged.
"Sure," I said and handed it over. She slipped it on and turned to look at herself in the mirror.
"Aaaaah!" the onlookers said - realising, as I did, that the cardigan was ...
Not Meant For Me.
It was not meant for me. That's all that needs to be said on the subject: it looked infinitely better on small, dark-haired Conchi instead of big, red-haired me. In fact, it looked as though I had actually made the cardigan for her. On purpose. Rather than by accident.
"Keep it," I said, a tad sulkily.
Essentially, I had no choice. How could I wear it, knowing it was actually ... destined to be hers?

That's one of the things I have learned about making things: sometimes they are Not Meant For You. This is an example of this phenomenon:
I crocheted beautiful (I thought) African flowers from sock yarn. 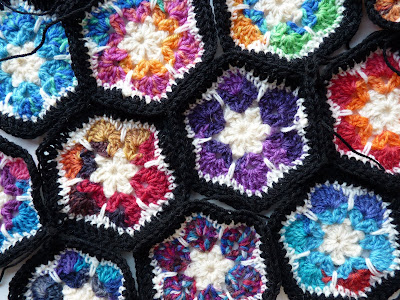 I crocheted about a hundred of them, wanting to make myself - that's right, me - a set of cushions for my couch. I bought the cushions. I sewed the little flowers together. I devised ways to make half-flowers and quarter flowers to create corners and edges. I edged the top, I sewed on buttons, I put the cover on the cushions and I realised that they were
Not Meant For Me.
Oh, they were very nice - but not right. Just not right. I don't know what the problem was, but I just wasn't happy. So I wrapped them up and attached a label (which my little sister made for me - gingerbread ladies ahoy!) 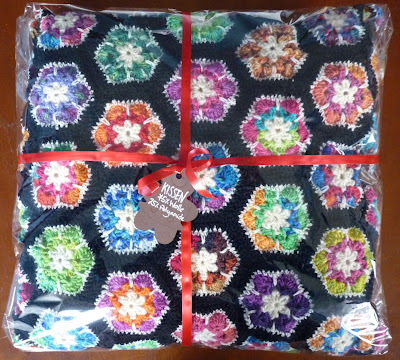 and added them to the cushions I donated to the Christmas bazaar.
Sigh.
What else could I do? If the Crafting Fates decide that what you make is Not Meant for You, you have no choice but to give in.
Posted by The Gingerbread Lady at 8:46 PM

I love that pillow! You're very generous to give it away. :)

It is gorgeous but I truly understand what you mean.

That is absolutely beautiful! I find it funny some people have a really hard time giving away things they make and others... have a harder time keeping them!

Oh, that happens, but at least the items will be appreciated by their Real Owners. Sigh.

You are a generous soul and I hope the right project for you makes its way onto your hooks soon!

They are so very pretty, that is very generous of you. You deserve even more yarn.