And they call it Zuppy love... 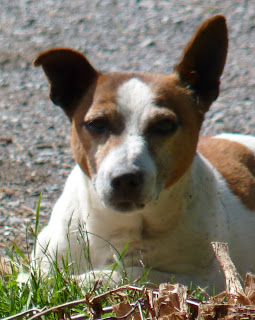 Christmas has become a complicated event. We have to tread carefully, so as not to insult any family members - and inevitably we fail. Neither my mother nor my mother-in-law is willing or able to understand why we cannot (will not) spend Christmas at their respective homes. In the interests of fairness, we divide our Christmasses up between countries. This year, we're going home to Ireland for Christmas. One of the reasons for this is the encroaching seniority of Zuppy, my parents' dog.
"He's twelve, you know," says the husband. "He mightn't be around for much longer."
And a tear glistens in his eye.
Okay, maybe not, but I cannot emphasise enough the special bond that Mr Gingerbread and Zuppy share. It's astonishing that Zuppy even recognises me - after all, he only sees me two or three times a year for a week or two at a go, but he knows who I am and knows that I'm a soft touch for treats. And although he's pleased to see me, this is nothing compared to the near-orgasmic joy when he's reunited with my husband, whom he sees even less frequently. And the joy is mutual. As the car pulls down my parents' driveway, Mr G's nose is pressed up against the windowpane, waiting for the sight of the dog.
"Zuppy!" he hollers.
Zuppy freezes, then - bang!
Off he goes, bounding down my parents' yard with ears flapping, tongue lolling out and teeth bared in a joyful grin. And that's just my husband. The dog looks just as happy.

It's been like this from the start. Back then, when dog and man were younger, fitter and more energetic, they liked to play together in the yard. It was quite an extraordinary sight: Very Big German Man and Very Small Jack Russell. Their favourite game was 'That's My Stick!': my husband threw the stick, the dog caught the stick, then they spent twenty minutes playing tug-o'-war with aforementioned stick.
"That's my stick!" my husband would yell, waving the stick (and the dog attached to it) in the air.
"That's going to end badly," said Gingerbread Daddy one day, looking out the kitchen window. Husband and dog were nose to nose, husband on all fours on the grass.
Gingerbread Daddy looked over at me. "That's going to end badly," he repeated in A Significant Tone.
"Don't worry about husband," I said, "He won't let the dog hurt him."
Daddy rolled his eyes. "Yerra, I'm not worried about that eejit," he said, "It's the dog. He might lose a tooth hanging out of that stick."
"I'll talk to him," I said. To the dog or the man? Probably both, I thought. I looked at the window: at that point, dog and man had become a tangle of limbs and I just didn't have the heart to break them up.

Which is a pity, because seconds later my husband ran into the house, his hand aloft. He was bleeding heavily from a gash in his hand.
"It wasn't his fault!" he said, "I swear, it wasn't his fault. I put my hand in his mouth. He was expecting the stick - he was just over-excited."
I cleaned the wound (it wasn't deep) and affixed an appropriate plaster. Obviously, I gave him a telling off for playing rough: husband hung his head in shame. That done, I went outside to give the dog a telling off - but Zuppy had gone underground, hiding in the woodpile with only the stick for company.

They were not allowed to play together for a while till they'd both clamed down and learned to play nicely. Then they skipped off down the yard, waving the contentious stick, and within minutes they were rolling around the grass again.
Oh, the joy. Mr Gingerbread just can't wait.
Posted by The Gingerbread Lady at 11:46 PM

I love this story. Thank you for sharing it.

Thanks for the morning smiles (and laughter). Love reading your posts. Have a wonderful day.

I really got lost in your little story. Thanks!

Oh....you brought a tear to my eyes. I love Zuppy and I don't even know him! I have had jack russells for years. Misty and PeeWee both from pups in 1996, both gone now. I have one of their sons who was my best friends dog until my best friend passed away. He's going to be 13 in March and I don't even want to think about him leaving me. I feel Mr. Gingerbread's love for Zuppy.