But those little ones - they grow up so fast! And yesterday evening, we went upstairs to eat out on the roof patio and discovered this:
So we unpacked our evening picnic and opened a bottle of wine, trying to be all posh and Continental (Mr Gingerbread doesn't even have to try - he is Continental! I, on the other hand, showed my less posh Islander roots by producing a screw-top bottle of our local plonk. I do try, though.) The pigeons were not impressed. In fact, there was a lot of feather-ruffling and shifting from one claw to the other as they tried to make their feelings clear about our invasion of their personal space.
"They're very nervous," observed my husband - who is quite entranced by our little trespassers, I might add. The big eejit.
"But it's our balcony!" I shrieked, with wine-induced feistiness.
Perhaps sensing the hysteria, the pigeon on the right suddenly took to flight - and slammed into the wall.
Mr Gingerbread hopped up and tried to (cough) help the pigeon by cornering it.
("It doesn't want to be touched!"
"I'm just going to put it back in the nest!"

"It'll have a heart attack and die of fright. Leave it alone."
Ignores wife and continues to approach pigeon with the stealth of a very big cat. Which made the pigeon feel so much better, I'm sure.)
Instead of behaving like Long John Silver's parrot, the pigeon took off and flew into the gutter on the other side of the building. And stayed there. 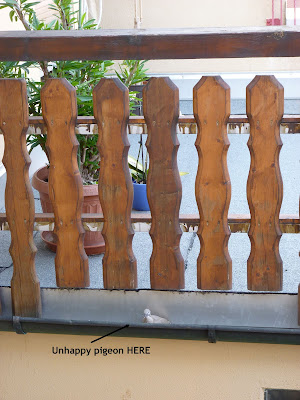 While its sibling fixed us with its gimlet eyes, staring at us evilly for half an hour before simply ... flying away.

So we've been pigeon-watching all day long. The parents returned and hoo-hooed at us for hours on end in a very accusing tone. We tried explaining that we didn't actually do anything, but to no avail. Baby Pigeon flew from the gutter to the bedroom window sill late last night and, as a result, we had to sleep on the bed sofa in the living room in case we scared it.  This morning it flew back up on to the patio and later perched on the railings before disappearing - leaving copious amounts of stress-induced pigeon poo in its wake.

Mr Gingerbread and I went upstairs this evening to check if it was okay (Mr G.) and make sure the little blighters were finally gone (me), but aside from a splattering of excrement and a flutter of downy feathers, the wingèd vermin had gone. Sadface.

Instead, after a day of non-stop rain, we had a spectacular sunset and a rainbow: 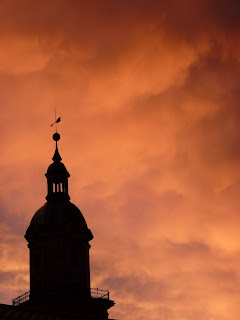 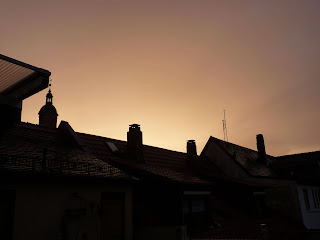 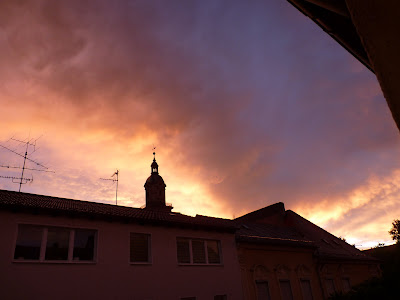 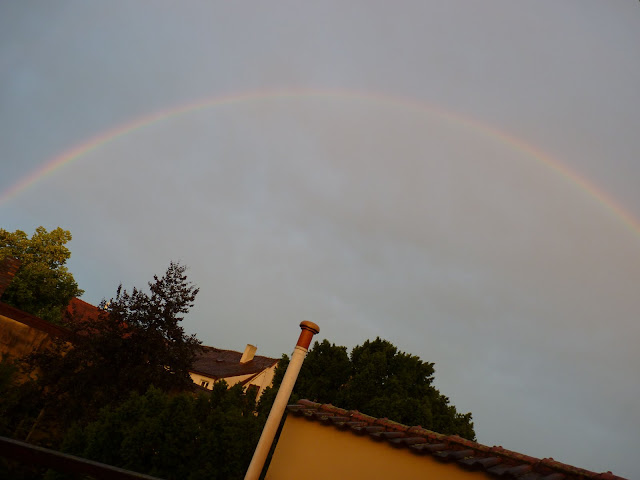 Posted by The Gingerbread Lady at 10:24 PM

You did ditch the nest, didn't you? It's funny your pigeon story paralleling our baby red-tailed hawk here in NYC. There was a webcam on it until it fledged. On a bright note, as it was in the window of NYU's president, it really inconvenienced him.