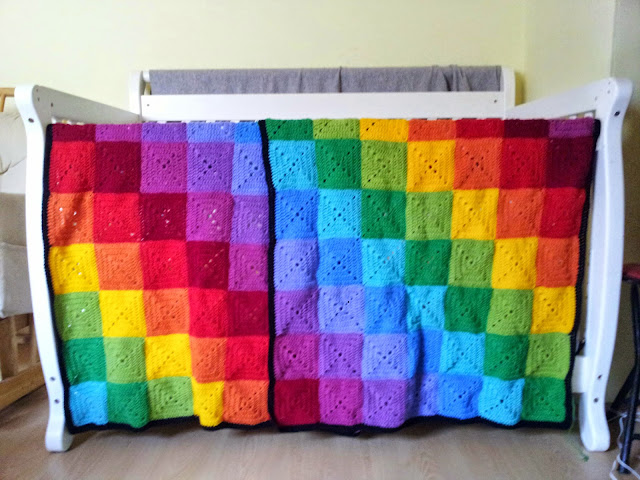 A friend asked me to make blankets for a friend of hers, who's expecting twins. I was told that the mother-to-be wanted "rainbow blankets". Rainbow-coloured blankets, I asked, or blankets with rainbows? It's always hard to guess what will appeal to someone you haven't ever met, so I made this pair of blankets in the hope that she'll like them.

My next post will actually be about crocheting. And it will be soon. I promise. Pinky swear.

The first week of August was World Breastfeeding Week, which - in blogging terms - I missed because I was busy breastfeeding. My son had an inkling of the week that was in it and decided to attach himself to me like Superglue. Not that I would've done much to celebrate, to be honest, not least because this year's slogan was 'Breastfeeding: A Winning Goal - For Life!'. I really don't know what to do with a statement like that; it leaves me feeling a bit bewildered and slightly edgy, as in did-I-just-see-a-mouse-out-of-the-corner-of-my-eye edgy or what-do-you-mean-you-just-put-your-tarantula-down-for-a-second-but-now-it's-gone? edgy. I don't know why. The slogan is a bit meaningless, really. Or it might be the excitable exclamation mark.

But on matters of punctuation I digress.

Just after the birth of my second son, another new mother rang me for breastfeeding advice. I am possibly the worst person to ring for breastfeeding advice because I am one of the (I suspect) many women who breastfeed because they can and they feel they should, but don't derive the astronomical pleasure that Good Mummies get out of it. What do I mean by that? Well, in the context of WBW, many intrepid bloggers pounded the keyboard to showcase breastfeeding in a positive light, bearing in mind that encouraging new mothers to bare the nipple is often a battle. To my astonishment, I discovered other mothers referring to breastfeeding as "a delight", or "delicious" or likening it to the high achieved by smoking marijuana. For me, it often feels like someone is chewing my nipple, which is essentially what it is. I don't feel delicious or blissed out on a natural high, although I sometimes feel very sleepy - and not in a good way. I have occasionally passed out on the sofa in a deep-phase micro-sleep, awakening seconds later to the infant hanging onto the nipple by his gums and the toddler drawing tractors on the carpet.

Of course, it doesn't help that I (have) had circulatory problems and vasospasms (don't ask, they're horrible. Imagine someone sucking glass splinters out through your nipples. There: that's all you need to know. Thankfully, though, this has subsided and my extremities are behaving themselves again.) Added to this is the sad fact that my children frequently do/did not latch on to the breast in that gentle Madonna-and-Child way: often it's like trying to get a feral cat to suck your bosoms. Apparently you can be hungry, impatient and incredibly interested in your surroundings at the same time and the way one expresses this is with flailing limbs, scratchy nails and twisting your mother's chesticles about so you can suck AND watch your older brother jumping off the sofa at the same time.

So when this other mother rang me for advice, I dolled out all the practical bits: drink non-alcoholic beer for milkflow. Put cabbage leaves in your bra for sore nipples. Feed on demand to regulate milk production.
"Can I ask you one more thing?" she said.
Fire away, I replied.
"Did you actually like breastfeeding?"
You mean, did I like smelling of sour milk and cabbage, with scratched breasts and inflamed nipples? Did I like sitting underneath a snoozy baby for hours at a time, looking at all the housework that needed to be done and holding in a need to pee in case he woke up again? No, of course not. It's horrible. There are times when I feel like my body is a dairy and little else. I'm sick of milk stains on my clothes, either through leaky nipples or regurgitated by an over-excited baby (because his sofa-diving older brother is just too exciting for his digestion). I want to wear an underwire bra again! And I'm aware I'm breaking a huge taboo here, because you're supposed to breastfeed and LOVE IT. You're supposed to feel CONNECTED to your childer in a way a plastic bottle and latex teat could never bond you. If you don't breastfeed or if you belong to the quiet minority that does and isn't exactly a fan, you are somehow an INSUFFICIENT MOTHER. And this other mother just ... didn't like it. It was painful, it made her emotional and tense, the baby cried with too much milk or because he wasn't getting enough, and her midwife told her that bottle-feeding her child when she could breastfeed him was just lazy parenting. I, apparently, was the only breastfeeding mother who told her that it quite often, literally, sucked and it nearly made her cry in relief to hear it.

Truth be told, I don't actually mind breastfeeding. I don't love it, no. I won't shed a tear when my youngest weans. But I don't hate it either, or I wouldn't be doing it. Let's take all the positives about mother+baby's health benefits as a given and look at the other (superficial) pluses: it's immensely practical. You can breastfeed anywhere you feel comfortable, and plenty of places you don't feel comfortable, too! (I know, because I've had to breastfeed everywhere but would much rather do it in my rocking chair at home.) It allows you to eat A LOT after birth (this is important. I'm not joking: I left the delivery room with a raging appetite and it hasn't abated). And - most importantly - you don't have to get up in the middle of the night to make bottles. If La Leche League wanted to persuade teenage mothers to breastfeed, they'd only have to arrange for someone to wake teenage mother-to-be with a recording of an angry baby, drag them out of their deep slumber and make them shuffle down to the kitchen in the bitter cold of a winter night to make a bottle at 2 a.m. Then again at 4 a.m. And maybe at 6 a.m. for the laugh. Voilà: problem solved. Next year's World Breastfeeding Week's slogan would be 'Breastfeeding: You won't know how much you love it until you realise you don't have to get out of your bed to do it!' Even with an exclamation mark, I think it has a broad appeal.

And there are other pluses as well, the ones that recompense you for your angry boobs: my child, for example, has started laughing at my nipples. He falls asleep, mid-feed, and wakes up to chuckle at my chest. It's one of motherhood's highlights and I don't mind occasionally smelling like rotting cheese just to see that sight. You are forced to abandon dirty dishes and/or social media and/or shopping lists to sit down with your little one and look at his fluffy head and wriggling ears as he chomps away determinedly at your breasts. Nature plugs your baby in to make you turn life down and sit still for a while. Because having your baby this close is a finite experience and, who knows? Once it's over, I might even miss it.

Cabbage leaves and all.
Posted by The Gingerbread Lady at 11:13 PM 7 comments: