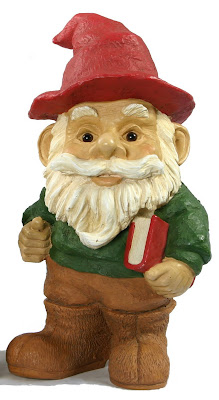 Okay, it has nothing to do with real gnomes but I do love a pun.

Good morning, folks! It's time for a dose of Stuff-You-Already-Know-But-Here-It-Is-Again. Today's topic is relationship advice. I like to think that in a parallel universe I am writing self-help books based on my paltry 2-year marital success or, indeed, hosting an afternoon talkshow in which I state the obvious but disguise it as a profound psychological insight, but in this world I get to torture you instead.
Cackle, cackle. (See my previous post. I'm practising for my twilight years.)
__________________________________________________

Wow. Knocked your socks off, didn't I? Well, like many people in the throes of a relationship - to man, woman or beast: this advice applies to all - you might have a somewhat different approach to cleaning than your other half or halves (thirds? quarters?). Cleanliness might be next to godliness for you, but it might be next to, say, the cornflakes for your partner. In our case, neither of us is enamoured of housework and very often cleaning the Gingerbread House becomes a very dusty game of collision-course 'chicken': who can hold out the longest? I don't think I need to tell you that my husband has beaten me at Let's Ignore The Dreck about 5980 times since we moved into our home. Up until now I've been annoyed by it: why doesn't he vacuum the floor when the dust has taken on tumbleweed proportions? Why doesn't he scrub the bathtub when the white enamel turns grey ? Why am I the only person who knows where the rubbish sacks are kept or why we have a bottle of Cif under the sink? I mean, he'll good-naturedly (and thoroughly) clean anything I ask him to. But I have to ask him to and I kept expecting that to change.

Let's go back in time a bit:
When we moved into our house, we had no cooker. So we bought one and then went looking for a nice gas hob for our new/second-hand kitchen. We stood in the display kitchen at IKEA and admired various cookers on display. I wanted a simple, 4-plate hob with an easy-clean surface. Mr G. wanted a five-plate megacool gas hob with a wok plate in the middle. ("Wok! Phwoarh!") He stood at the display unit and played with the pieces, his hairy face alight with joy. Disturbingly, he was making a lot of whooshing noises, like something going up in flames ("Brrrrooooooosssshhhhh!") as he twiddled the knobs.
"Let's get this one," he said decisively.
"No," I said, "Let's not. Look at all of those bits - they all have to be taken apart and cleaned. It's massive, it'll be a pain in the bum to scrub that every week."
"Pssshaw!" he said, "Tusssshhh!" and all kinds of other don't-be-silly noises. "I'll clean it! I don't mind!"
And he did.
Once. A few days after we bought it.
Since then, I've been the only person who minds that the shiny stainless-steel surface is covered in a sticky goo of over-boiled pasta paste or dried-in coconut milk. I mind so I clean it. It bothers me so it becomes my chore.

Now, I knew this going into this relationship almost a decade ago. I did, I swear. But I didn't want to accept it. Today, as I stood at the cooker with my sexy yellow rubber gloves on and the citrus smell of oven cleaner wafting about my person, Mr G. strode by, on his way to plaster a wall on the ground floor of the house.
"Cleaning the cooker, eh?" he said jovially.
"Indeed I am," I answered, scrubbing, scrubbing, scrubbing rock-hard spinach off the steel. The hob had acquired a patina of dried-in food that you couldn't help but see.
"I didn't even realise it was dirty," he said airily and picked up his plaster bucket.
So I give up. I accept it, I finally accept it: when it comes to housework, I'll just do it myself it if it bothers me. Or ask him to do it if having to do it myself bothers me. But there is NO POINT getting annoyed because he hasn't done it without me pointing it out.
The End

P.S. Mr Gingerbread voluntarily plastered walls today. This piece of advice does not seem to apply to DIY. But that's the subject of another post.
Posted by The Gingerbread Lady at 7:34 PM

Thanks for your cute little story today....took me away for a moment on my own cleaning.

Are you supposed to clean cookers? Hmm. {Goes away to reassess life}.

This does apply to DIY as well actually, and I try to tell my mother this, because my dad is as bad at DIY as I am at nuclear physics, yet they have decided that DIY is His Job and he keeps trying. He actually once gave himself septicaemia through kneeling on a nail, and nearly lost his leg. He also once dropped a chainsaw on himself while cutting down a leylandii. Then there was the incident with the vacuum cleaner and the paramedics.

Off to stop my own dear other half from doing the washing up because he does it wrong (that's because I'm controlling, though ;-) ).

Back in my student days, I knew a group of housesharing young men whose house had a gas cooker on which the ignition didn't work. Then one day an additional young man moved in who knew that You Are Supposed To Clean Cookers. And he did. After that, the ignition worked.

Back to the subject of the post, if you've accepted that housework is your responsibility, you must also assert your right to make housework-related decisions like which cooker to buy. Good luck with that one!

Oooh, Rachel, I'm definitely going to be the Boss of Housework ... and part of being a good boss is delegation. Monday morning there'll be a 'to do' list on the pinboard in the kitchen. I'm not Mrs Holly Hausfrau but I'd like to pass a basic health & safety check, haha.

Susie - I'm a pretty nifty DIYer myself. No gender-assigned roles for me and my mad tiling skills. But today I was pushed to my limits. We had to remove some plaster from the wall near the roof and I stood quivering in the doorway, watching the husband hop around the roof, while I did the damsel-in-distress: "Don't fall! Don't go near the edge!" I hate heights.

Please don't let health and safety anywhere near my house! The 'Who's going to crack first' game has been going on a long time here. The only time we call a truce is when his parents come to visit, when we both suddenly notice what a terrible state the place is in.

Your post gave me a really good laugh. Honestly, I'm the worst Hausfrau on planet earth and easily beat my husband in "Let's Ignore the Dreck". But your realtionship advice put him in his spot. Hah. Bothered by it - his chore. Yeah!!!

Oh I'm terrible too...Unfortunetly I also pay for it...Last year I was diagnosed with a severe allergy to dust mites...yeah that means I should clean...but nope I stay congested and take allergy meds....The Hubs will clean certain things, he does laundry (he hates the way I fold), he cooks (I hate to cook), he does the garbage and recyclables...Today he cleaned the oven, which is good, I wouldn't have been able to, as I started getting sick from the fumes...I holed up int he bedroom and finished crocheting a hat..