Hello cyberspace!
I was in Munich this weekend.

For some reason that I can't fathom myself, I don't like Munich. And Munich doesn't like me. Whenever I have to travel to or from Munich, the public transport system - trains, trams and the underground - conspire to keep me from getting there. And once I do get there, I inevitably get lost and spend a lot of my time walking around in circles - usually in the rain, preferably with gale-force winds, and because it has taken me an extraordinarily long time to actually get to the Bavarian capital, it's usually dark as well. And that's how it came to be that I was wandering around an industrial estate in the driving rain at 8 p.m. on Friday night, my print-out of the city map sodden and illegible, cursing Munich. I finally gave up, grabbed a taxi and had the nice taxi driver bring me to my destination.

Occasionally, there are entertaining events on my travels in Munich. The last time I was there with the Gingerbread Husband, we were roped into a very energetic discussion about heavy machinery. It all started when a young mother got on the tram with her little boy, a tiny toddler of not more than two or three years old. While she folded the buggy and stowed it under the seats, he hopped up on to his seat and pressed his hands and face against the window. He scanned the view, then hopped in excitement:

"Mama! A digger!" His pudgy finger tapped the glass and we all turned to look.
There in distance we saw a digger on the building site next to the station.
"A digger!" he shouted, "A digger, look, Mama! Look, a digger!"
"I see it," she said. "I know, it's a digger."
"A digger!" he shrieked, more urgently.
She nodded and tried to get him to sit down.
"A digger!" He hammered the glass with hands. "Mama, Mama! Look, look, a digger!"
She tried to pull him away from the window, but she was no match for the magnetic attraction that building machinery holds for little boys. 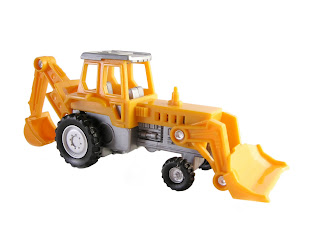 "A digger, a digger!" he shouted.
Not satisfied with her lack of excitement, he turned to me.
"A digger!" he said, banging the glass. "Look!"
"Wow," I said, as appreciatively as I could. "A digger. Goodness me."
Disappointed, he turned to the Gingerbread Husband for manly support. "A digger, look, look. A digger!"
Husband made impressed noises, but not even that was enough.
"A digger, look!" he implored the rest of passengers and, obligingly, they all looked out the window and oohed and aahed.
"Shhhhh, come away from there," his mother said as the train began to move. The movement of the train just made it all the more exciting.
"Look, look, a diggerdiggerdiggerdiggerdigger!" he shouted, then suddenly realised that we were moving away from the digger, and not towards it.
"A digger," he said mournfully, his little finger making a smear on the glass. "A digger." Then, barely more than a whisper, "A digger."

All of the passengers shuffled uncomfortably. Never before had we been so profoundly affected by the loss of a digger. The little boy peered over his mother's shoulder and watched the digger disappear in the distance, then pressed his nose to the window and silently watched the houses whizzing by. The tram slowed and pulled into the next station. The Gingerbread Husband and I got up to leave, gathering our things and nodding goodbye.

As we were leaving the tram, we heard the little chap shout, "Mama! A bus! Look, Mama, a bus!"
And as the electronic doors whooshed shut, we heard his squeaky voice shout, "A bus, Mama, look, look, a bus, a bus, it's a busbusbusbusbus - "
Our last glimpse of the little boy was his rapturous face pressed up against the tram window, his fingers splayed like little starfish on the glass.
Posted by The Gingerbread Lady at 10:16 PM

Hi...I just hopped over from Ravelry. I loved the story of the little boy and the digger!

I'm sorry to hear you and Munich don't get along well! I lived in Munich for two years as a teen-ager (in the late 70's) and loved using the S-bahn. Never got the hang of the buses, though. But I liked living in Bavaria.

I have a grandson who adores diggers, and indeed, anything mechanical. I must send my daughter a link to your story!