Things you should know about my father

My father's birthday was in February but we were awash in the various fluids that accompany a dose of the 'flu at the time. As I've summed up my mother, I thought it might be fair to tell you a bit about my father as well.

Things you should know about my father

1. He pushed my mother into a puddle and laughed
My father first met my mother when he was five and she was four (I think. They were, in any case, scandalously young to be running around unsupervised, but this was Ireland in the fifties. I think parents ushered their kids out the door in the morning and did not expect to see them again till supper-time). He shoved her into a puddle and laughed at her. My father claims to have no memory of this incident; my mother, however, does and even maintains that he was wearing one of my grandmother's meticulously knitted pullovers whilst doing the pushing (held at arm's length to this little beast, she was probably in a very good position to view his knitwear.) When she wants a bit of extra sympathy, she also says that he and my Uncle John were laughing ("demonically")  as they pushed her - but, as I said, this bit is only tacked on occasionally and I have a feel that, half a century later, she's just embroidering an already dastardly tale.

But the years passed and my father turned into a skinny teen with a big hat and a lot of angst, and my mother found this quite attractive (I think men in big hats and artistic overcoats were uncommon 1970s Ireland). They got married in a flurry of flares and oversized lapels and produced a plethora of children. Sadly, they do not recreate the puddle-pushing on special occasions nor, to my knowledge, has my mother ever pushed him back.

2. He saved my life
When I was a toddler, I swallowed a fish-bone and started to choke. I don't remember this, but my mother (she of the "he was wearing a handknitted jumper and laughing his head off" version of events, so take it with a pinch of salt) said my lips were turning blue and I couldn't breathe. I'm not sure if deceased relatives were trying to usher me down a tunnel toward the light, but I was certainly in dire straits. Not acquainted with the Heimlich Manoeuvre, my father grabbed me by my chubby ankles, swung me upside-down and shook me hard, as you would do a pillow and - lo and behold - the fishbone was dislodged.
I'm very grateful to him for this and to this day, harbour a suspicion that fish are out to get me.

3. He never wanted us to have pets
"We are NOT getting another pet! I'LL end up looking after it! Not a single ONE will look after this dog/cat/rabbit, you all know I'LL be the one taking it on walks and feeding it!" etc.
My father has spent the last forty years telling us we're not getting another pet.
We've had a succession of pets.
And, to be fair to him, he has in fact ended up looking after every single one of them. On a visit home from Germany a few years ago, I saw my father walk up the lane to our house with his wheelbarrow (because another thing you should know about my father that doesn't warrant a point of its own is that he has filled the potholes in the entrance to our house about a hundred thousand times) and saw him followed by a procession of animals: a Jack Russell terrier, four cats, two miniature ducks and a couple of stray chickens who were out for an opportunistic walk. I have also seen him feed the Jack Russell from a spoon, store a kitten in his coat and pick worms out of a freshly-dug flowerbed for the ducks.
But he hates pets and doesn't know why we keep insisting on having the blighters.

4. He doesn't like people touching his things
Which is unfortunate when you have nine children, because no one ever had anything to call their
own in our house. There was always a young child on the rampage, your precious possessions firmly grasped in a sticky paw.
"All I have is this comb!" my father would wail, holding up a plastic comb. "It's the only thing I have, a bloody comb for my hair. I leave it here on the mantelpiece and when I come down in the morning, the comb is gone! Who keeps taking my comb?"
Ah, it was the soundtrack to my youth: my father and his comb. At one point, he got it into his head that he might chain the comb to the mantelpiece - an idea we all found very entertaining. Sadly, though, he much preferred ranting about how he was going to chain the comb to the mantelpiece more than actually chaining the comb to the mantelpiece.

5. He like a rant
The index finger will go up.
"I'll tell you something," he says, leaning in. And he's off. Frequent topics for rants over the years have included: People (more about that in a minute), Not Getting Another Pet, Disappearing Combs, A Packet of Biscuits Not Being Shared Fairly, The State of Ireland, People. It's a very diverse list and it changes, with some points remaining constant (People).

6. He doesn't like people, especially people visiting him
No, don't get the wrong idea. My father's not a xenophobe. He doesn't like most people, regardless of where they're from or what they look like or do. They're loud and they can be rude and a select few of them (most notably - the cheek of them - his family) have the audacity to want to visit him and make him make ... small talk!!! Sometimes when he sees the lights of an approaching car and scarper off down to his shed, conveniently forgetting his mobile phone, leaving my mother with a bunch of unannounced visitors to entertain. (And a short note on this: in Ireland, people still pop in for a visit without calling. Why call and ruin the surprise? Think of the joy you'll give someone by just turning up at their door unannounced, looking for tea and biscuits. Ahhhhh. Maybe I've just been in Germany too long.)

7. He paints pictures in his shed
My father is an artist. Nowadays, that's a mildly interesting statement to make, but when my father was young, I believe saying you wanted to become an artist was about as ludicrous as wanting to become an astronaut or a lion-tamer. I don't know how my grandparents reacted, but I'm sure rosaries were said to save his soul and get him back on the straight and narrow path to the civil service or a nice job in the laboratory of the local roof tile factory. But he painted anyway. And now he does it professionally, as a graphic artist, and semi-professionally as a painter, intrepid blogger and YouTube fiend. By day, he's a mild-mannered (though given to an occasional rant) visitor-hating, animal-loving father of nine; by night he paints pictures and has a cyber-life that includes video channels and fan posts. 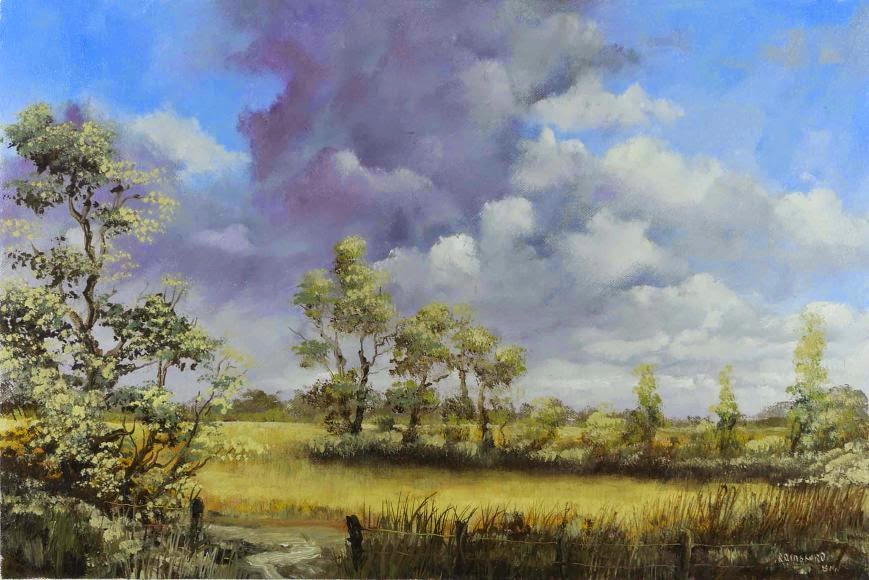 8. He paints pictures in his shed (II)
Before my father became a graphic artist by day, he did actually work in the laboratory of the local roof tile factory. But he and my mother decided that the laboratory of a roof tile factory is a very good place for a soul to die, so they set up their own business. Two weeks before a global recession, oh dear. It was a grim time, a lean time and a very hard time. But in the middle of this very awful, grim period, where we were constantly tiptoeing along the line to bankruptcy and losing - oh, everything, one of my teachers said, "You know, your parents have given you the greatest gift you could possibly get. They took the road less travelled and gave up a steady job to do something they're passionate about. You'll never be afraid to do the same, because you'll come through it and see it can be done."
And she was absolutely right.
Twenty-five years and two recessions later, their business is still going. Bravery is a very good thing to pass to your children.

9. He will wear a fake rabbit in his pullover
... because that's what good parents do. When my brother William was small, he had a soft toy called Baby Rabbit. Baby Rabbit tended to get lost, so my father was given to wearing Baby Rabbit in the V of his v-neck jumper so Baby Rabbit go to see what was going on, while remaining in a safe place. This seems like a random thing to remember, but the other day my husband ate imaginary cake out of Lego blocks at a teaparty for Papa, Wuffie the toy dog and my two-year-old son, and it reminded me that saving a child's life is a magnificent piece of parenting, but eating fake cake and wearing soft toys is just as important, and maybe more.
Posted by The Gingerbread Lady at 9:55 PM

He sounds like an interesting, eccentric, wonderful man. Happy belated birthday to your dad!

Your dads site won't open as my security software tells me it has a virus attached to it :(. Your dad paints in his shed and you paint with words. A most artistic and brave comb thieving family if ever I stumbled over one. Could you give me the name of your dad's blog so I can check it out, hopefully sans "AVERT YOUR EYES A VIRUS BE PRESENT!" warning that I got from Mr Kaspersky ;). I love this blog. I always feel like I 'get' your family. I guess that is what social media is all about. A small window into someone elses life, and the story teller is the key to whether the story is incredibly interesting or just syndicated fluff.

My granddad was really surprised when he first arrived in NZ in 1939 that people called on other people without pre-arranging it and they sometimes didn't even wear a tie! Things were apparently a bit more formal in Vienna.