Home, Home on the Range

Hello Readers!
After a surprisingly disaster-free journey, I find myself back in the bosom of my family. Yesterday I returned home from a trip to the nearest town to the sight of my second-youngest brother's bottom bared as target practice for a toy gun that fires soft darts. Youngest brother and three teenagers of the gangly&pimply variety (standard issue, in other words) were taking turns to aim at the lillywhite bum-cheeks of William Gingerbread with a child's gun. There was much guffawing as the darts flew in every direction but his posterior, and a squabble ensued about whose turn it was, who'd had it the longest, who saw it first etc. If you have five brothers, as I do, you tend to pretty blase about such shenanigans (though I must admit that I'm fighting a desire to wash my eyeballs with industrial-strength cleaner, but this will pass.)

The Gingerbread Homestead is an old stone house in the middle of nowhere. It looks quite idyllic, even on a dull and foggy day like today. 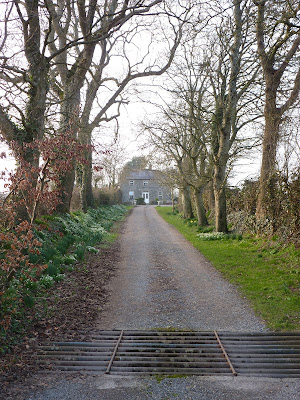 The grid at the front is a cattle grid. It's a pit with bars across it to stop cows from running down my parents' lane. Cows and bullocks are not particularly smart but they shy away from cattle grids. (Although the occasional bullock actually leapt over the cattle grid and took a trot down around the garden, trampling my father's daffodils.) However, frogs and hedgehogs do not have very good depth perception and often ended up trapped down the cattle grid. Naturally, we children felt compelled to "rescue" them. Many's an afternoon I spent on my stomach by the cattle grid with a pair of super-strength gardening gloves, trying to coax a sulky hedgehog through the bars. It's not easy: hedgehogs, as one may have heard, don't take kindly to human help.

Aside from that, we don't have an awful lot to offer in the way of entertainment. In fact, the highlight of the neighbourhood is The Big Tree. It is - brace yourselves - a big tree. This is it, in all its glory (plus a passing tractor pulling a foul-smelling slurry spreader. A romantic pastoral scene, indeed.)
Such is our lack of local landmarks that a visit to the Gingerbreads inevitably includes a walk to The Big Tree. We walk down the road, look at the tree, turn around and come back. Exciting stuff. Well, actually, it is if you're small, because a walk to The Big Tree also involves checking out the progress of the crops in the fields, any passing farm machinery, status check of the grazing herds of cows and bullocks, looking for blackberries, dandelions and any other seasonal fruit or flora, culminating in a 365 degree inspection of The Big Tree itself. When my husband first visited my family, my little brothers were much littler. Naturally, they were dying to bring him out on the roller-coaster ride that is a trip to The Big Tree. Off we went, Robbie, Wilmie and Jimmy Gingerbread in tow. With much fanfare we presented to him The Big Tree in all its glory.
He looked it up and down and said, "Oh, I see. It really is just a tree. From all the fuss, I thought that was just, like, a code name for something else. Something more ... spectacular. But it's actually just ... a Big Tree."
Duh, my little brothers' faces clearly said. He's not the brightest, is he?
Posted by The Gingerbread Lady at 5:43 PM

LOL - so glad you are finally visiting with the family...and I just love the setting of your parent's house...I've never lived in anything but apartments in cities.

Have you never been tempted to make and hang something from The Big Tree? it is beautiful as it is but I don't think I would've been able to resist the temptation to add something sparkly to it.

I was hoping to see a picture of Zuppy! Such a cute little booger he is. :o) xoxox

That house is beautiful. Why would you post such a picture? Now I am dissatisfied with my life. Grr! ;-)