The Poet's Wristlets: A Poem of Trauma

Intrepid Ms Gingerbread's lying in bed,
With visions of mittens filling her head.
"A cute little glove with an African flower -
Why, I could make that up in less than an hour!"
And the next day at breakfast, she takes up the hook.
Makes up her hexagons, but soon finds herself stuck.
She frogs back to round one and does it all over
With a selection of naughty words that do not behove her.
And again she restarts - and again, and again:
Starts attempt eight, attempt nine, attempt ten.
It soon becomes evident (if you will permit)
That we've a case of more rip-its than The Muppet Show's Kermit.
But ignoring the cheap jokes and poor rhyming metre:
Our heroine's determined this mitt won't defeat her.
She gets down to work and she finally finishes
And takes a quick photo, e'er her interest diminishes.
It's something quite different that she originally planned,
The hook did its own thing when she took it in hand.
The image in her mind's eye just got lost in translation:
She offers her apologies and this verse as compensation.

I need to recover from this trauma before I attempt to write the pattern. 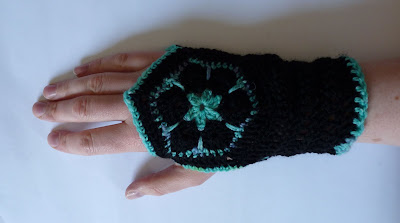 Posted by The Gingerbread Lady at 3:57 PM

Wow, that is just great. I love the poem and the wristlet. You ought to submit your poem to one of the crochet publications---they'd love it. I have a suggestion for the title, "The Crocheter's Lament".

I concur with Emily. I love it, give up the crochet and get published! PS: Very SEXY hand I must say.
:-)

Thank you for making me laugh!